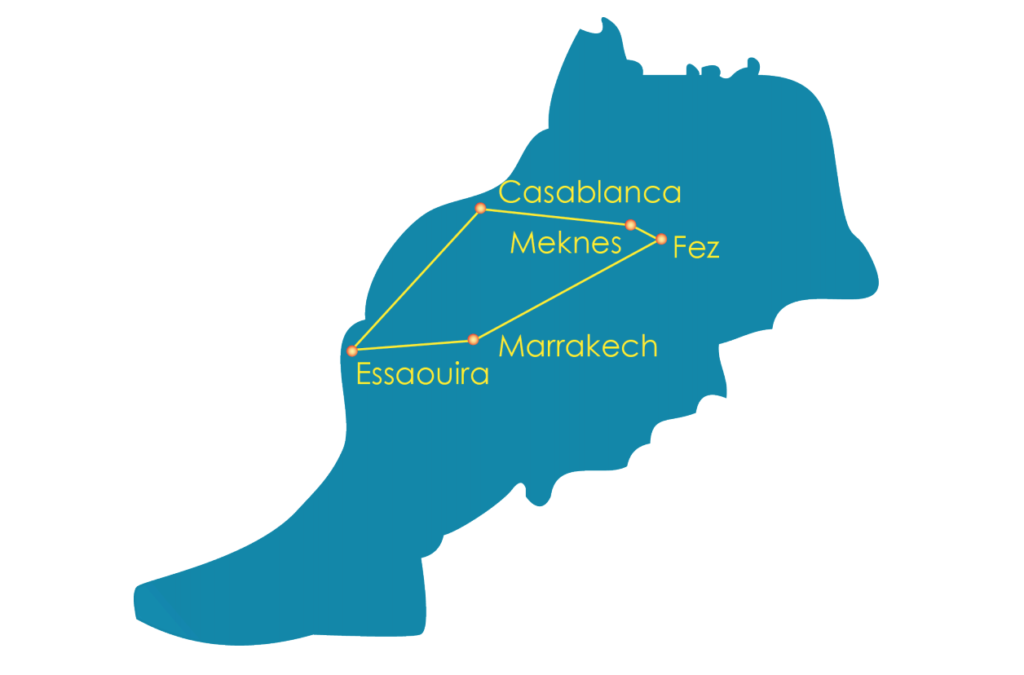 Day 1: AIRPORT – CASABLANCA
Arrival at the Casablanca Mohammed V airport. You’ll be welcomed and assisted by our staff and checked in at the hotel. You will begin a sightseeing tour of Casablanca, the economic capital of Morocco. The tour will include a visit of Mohammed V square, Royal palace and habbous district, the residential area of Anfa, the United Nations Square, the Ain Diab Corniche, and the Hassan II mosque (the largest mosque in Africa decorated with beautiful tiling of the utmost craftsmanship).

Day 2: CASABLANCA – RABAT – MEKNES
After breakfast, departure for the second imperial city Rabat, the administrative capital of the Kingdom of Morocco. At arrival you’ll kick off our sightseeing tour with a visit of the marvellous sumptuous Mohamed V Mausoleum, the Hassan Tower, the Ouadayas garden, the Mechouer, and the ramparts and walls surrounding the Royal palace. Then you will leave for Meknes which was the capital city under the reign of Moulay Ismail (1672-1727). This city is famous for its 40 km long city walls that preserve the most beautiful gate of Morocco, Bab Al Mansour. You will also visit the Royal Stables which housed up to 12,000 horses of Sultan Moulay Ismail. Overnight in Meknes. B/D

Day 3: MEKNES – MOULAY IDRISS – VOLUBILIS – FEZ
After breakfast, departure for Fes via the holy city of Moulay Idriss where the founder of the Islam in Morocco is buried; this town is famous for its green rooftops and offers one of the most picturesque views of Moroccan town life. On your way to Fez, you will also visit the roman city of Volubilis. Volubilis features the best preserved excavations in this part of Northern Africa dating from the Roman Empire. In 1997 the site was listed on the UNESCO World Heritage list. Overnight in Fez. B/D 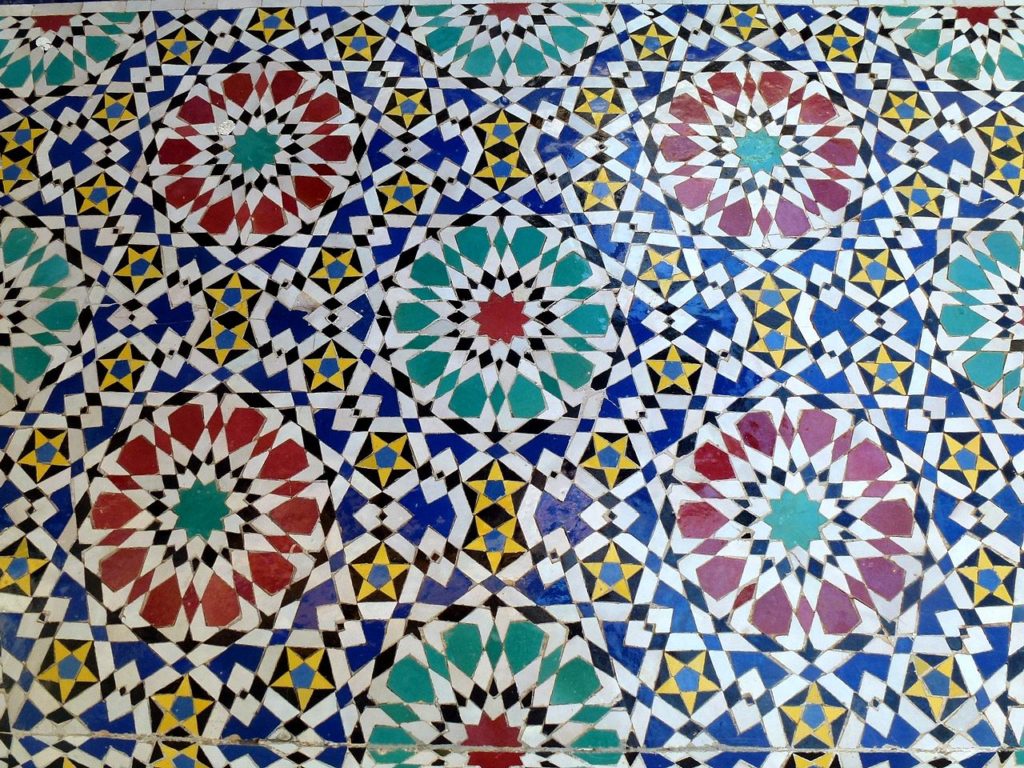 Day 4: FEZ
After breakfast, enjoy a full day tour of the oldest imperial cities, founded around 790 by Idriss Ier. Fez, who was for many centuries a political and intellectual capital of Morocco, had become a center for meetings and exchanges. It is reported that Pope Sylvester II 999-1003 stayed in his youth to study in Fez after which he introduced Arabic numerals to Europe. The Medina of Fez, one of the most beautiful in the world Heritage listed by UNESCO. Fez has retained many vestiges of its past: the mosque and university Karaouine, the largest in Morocco, the Andalusian Mosque, the Fountain Nejjarine Zaouia, Moulay Idriss, the medina and souks. B/D

Day 5: FEZ/BENI MELLAL/MARRAKECH
After breakfast, you will leave for Marrakech passing by the Berber village of Immouzer du Kandar and Ifrane and arrive in Beni Mellal. It sits in the foot of Mount Tassemit and is one of the agricultural centers of Morocco. You will arrive to Marrakech late afternoon. Overnight in Marrakech. B/D

Day 6: MARRAKECH
After breakfast, tour of Marrakech, the southern capital, located at the crossroads of the desert, mountains and plains of the Atlantic. The red city and its atmosphere are enough to seduce the most demanding. Medina, covering an area of 600 hectares, is one of the largest medina in Morocco and most populated of North Africa. The famous walls of the old city of Marrakech underwent significant changes at the whim of dynasties. Thus, they were repeatedly punched in the new gates (Bob in Arabic). Today, the height of the walls are between 8 and 10 meters and they cover a total distance exceeding 19 km. Historic visit to the Koutoubia minaret dating from the twelfth century, a symbol of the city. Also enjoy a visit to Djema’a El-Fna, in the heart of Marrakech, with its acrobats, snake charmers, and maze of alleyways lined with souks. B/D

Day 7: MARRAKECH/ESSAOUIRA
After breakfast, departure to Essaouira, formerly known by its old Portuguese name “Mogador”. Essaouira is a citadel with a prestigious past. It has been occupied since prehistoric times and was famous for its Tyrian factory which supplied Rome with the legendary purple dye. A cradle for artists of all kinds, Essaouira is also well known for its fishing port and market, a hive of activity day or night. During your time in Essaouira you will visit the port, the Scala, the municipal market, the jeweler’s quarter and a handicrafts complex. Overnight in Essaouira. B/D

Day 8: ESSAOUIRA /CASABLANCA
After breakfast, you will leave for Casablanca. Spend the day at your leisure. Overnight in Casablanca. B/D

Day 9 : CASABLANCA /AIRPORT
After breakfast, you will be transfered to Casablanca airport for your flight back home. B

NB: This program is subject to change. However, the content of the program will be always respected.