Day 2: Delhi
You will arrive at New Delhi’s International Airport. Following customs, immigration formalities and baggage collection, a local representative will meet you as you exit the arrivals terminal  building after which you would be transferred to your hotel. Overnight at the hotel.  B/D

Day 3: Delhi
Morning proceed for the visit of Old Delhi – visit the resplendent “mosque of Friday” – Jama Masjid. Jama Masjid is the largest mosque in India and is one of the last architectural works of the Mughal emperor Shah Jahan – whose best work is the Taj Mahal. The spacious courtyard of the Jama Masjid holds thousands of faithful devotees.   After visit of Jama Masjid Walk through the colorful shopping bazaar known as Chandni Chowk (“Moonlit Street”), enjoy Rickshaw ride at Chandni Chowk. Drive past the Red Fort – a majestic Fort and an erstwhile seat of power – which encapsulates a long period of Indian history and its arts. Also visit Raj Ghat, the cremation site of Father of Nation, Mahatma Gandhi.

In the afternoon visit New Delhi – Qutub Minar, the pride of Delhi. The Construction of this tall minaret was commenced by Muslim ruler, Qutb-ud-din Aibak in 1192 and completed by Iltutmish. The soaring conical tower is an exquisite example of Indo-Islamic Afghan architecture. Humayun Tomb, is the Delhi’s first Mughal mausoleum, constructed in 1564 after the death of the second Mughal Emperor. It was built in accordance to the Indo Islamic architecture. After visit proceed for the Orientation tour of “Lyutens” Delhi – name d after the leading British architect Sir Edwin Landseer Lyutens. Drive past some of magnificent monuments designed by him such as India Gate and Viceroy’s House – now known as the Rashtrapati Bhavan (President Palace). Dinner and Overnight at hotel.  B/D

Day 4: Delhi–Mandawa
After breakfast leave by surface to to Mandawa. Mandawa is a town in Jhunjhunu district of Rajasthan in India. It is part of Shekhawati region, it’s known for its fort and haveli. In the afternoon explore the fascinating Manasion (Havelis) so you can admire the beautiful frescoes on the walls of these havelis. Dinner and Overnight at hotel.   Approx. 280 km/6 hrs   B/D 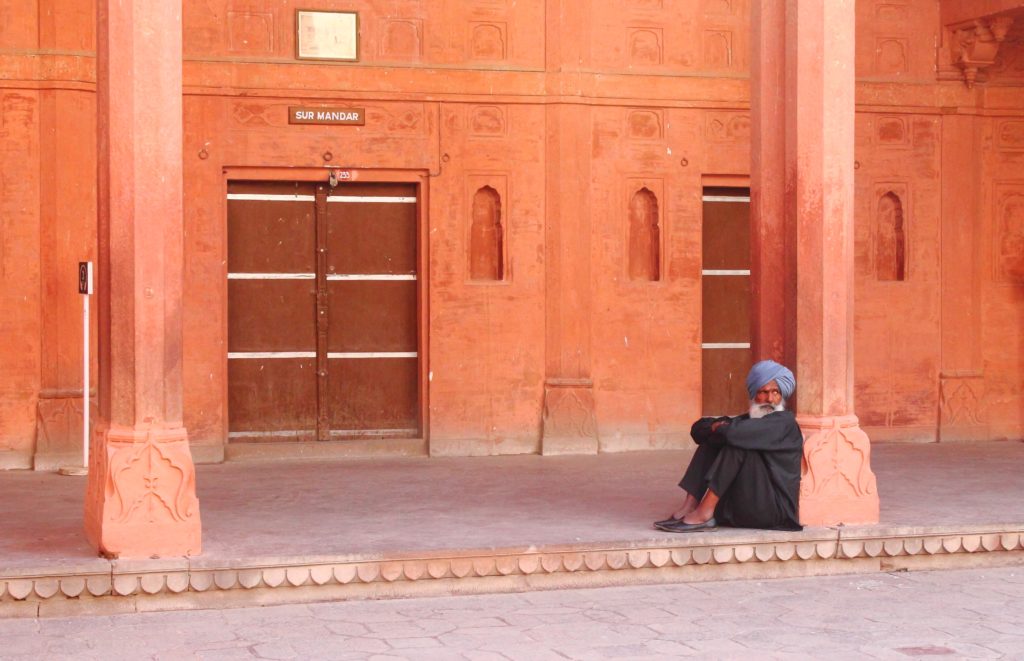 Day 5: Mandawa–Bikaner
After breakfast at the hotel drive to for Bikaner. In the afternoon take a tour of the city. Visit Junagarh Fort, one of the most impressive forts in Rajasthan, with its sumptuously decorated interiors. Built in 1588 by Raja Rai Singh it is unusual in the sense that it was one of the few major forts of Rajasthan that was not built on a hilltop. Instead, it was built on the desert plains; its rugged sandstone bastions and graceful pavilions and balconies are silhouetted against the sky. Dinner and Overnight at hotel.  Approx. 170 km/4 hrs  B/D

Day 6: Bikaner–Jaisalmer
After breakfast at hotel drive to Jaisalmer. Jaisalmer, the Golden City of India, is famous for its magnificent Forts, enchanting Palaces, Havelis (mansions) and century’s Old Houses. Arrive in Jaisalmer and check-in at hotel. Rest of the day would be free at leisure. Dinner and Overnight at hotel.   Approx. 330 km/7 hrs  B/D
Day 7 : Jaisalmer
After breakfast at the hotel, proceed for the sightseeing tour of Jaisalmer City. Visit The 12th Century Jaisalmer Fort is one of the most formidable forts in Rajasthan, India. Perched on Trikuta hill, Jaisalmer Fort is a 250 ft tall and massive fort surrounded by a 30 ft high sandstone wall with 99 bastions, offering a spectacular sight to visitors. The Fort also houses a Jain Temple. Once the residence of wealthy merchants, the Havelis (Mansions) of Jaisalmer are famous for their artistic designs and decorations. Their exclusive cutwork, yellow and red stone treatment, and the bracket-shaped decoration of peacocks, never fail to mesmerize the visitors. The Patwon-ki-Haveli, Salim Singh ki Haveli & Nathmalji-ki-Haveli are major tourist attractions in Jaisalmer. Afternoon you will be visiting Sand Dunes. Enjoy the Camel Ride there. Return to the hotel after the sightseeing. Dinner and Overnight at hotel.  B/D

Day 8: Jaisalmer-Jodhpur
After breakfast at hotel drive to Jodhpur. Jodhpur was formerly the seat of a princely state of the same name, the capital of the kingdom known as Marwar. The city is known as the “Sun City” for the bright, sunny weather it enjoys all year. It is also referred to as the “Blue City” due to the vivid blue-painted houses around the Mehrangarh Fort. In the afternoon visit Mehrangarh Fort (citadel of the Sun) that evokes the very spirit of the Rathores, the ruling local Rajput clan. Visit its various palaces with their delicate friezes and respective museums, displaying treasures of the royal family. Also visit Jaswant Thada is a pillared marble memorial to the popular ruler Jaswant Singh II (1878-95). Dinner and Overnight at hotel.   Approx. 290 km/6 hrs  B/D

Day 9: Jodhpur–Kumbhalgarh
After breakfast at hotel drive to Kumbhalgarh. In the afternoon visit Kumbhalgarh Fort. The Kumbhalgarh fort was constructed in the 15th Century by Rana Kumbha. The Fort was one of the very few forts in history, which never got conquered. One of the most important reasons stated for it is the aggressive or the hostile landscape of the fort. Dinner and Overnight at hotel.   Approx. 175 Km/4 hrs  B/D

Day 10: Kumbhalgarh–Ranakpur–Udaipur
After breakfast at hotel drive to Udaipur enroute visit the famous Jain Temple of Ranakpur (Temples opens from 1200 to 1600 hrs for the public daily. Ranakpur is widely known for its marble Jain temple, said to be the most spectacular of the Jain temples light colored marble has been used for the construction of this grand temple. Over 1444 marble pillars, carved in exquisite detail, support the temple. There is onebeautiful carving made out of a single marble rock where there are 108 heads of snakes and numerous tails. Continue your drive to Udaipur. Udaipur, is referred to as the “Venice of the East”, the “Most Romantic City of India”. Dinner and Overnight at hotel.  Approx. 145 Km/3 hrs   B/D

Day 11: Udaipur
After breakfast at hotel proceed for sightseeing of Udaipur city visit City Palace, The splendid City Palace, posing over the fascinating Lake Pichola, is one of the most beautiful palatial structures. Udaipur has a number of small and big palaces, museums and the gardens, Saheliyon Ki Bari– Saheliyon ki Badi – Built by Maharana Bhopal Singh. Saheliyon ki Bari means Garden of the Maids and Jagdish Temple – dedicated to Lord Vishnu. Evening enjoy boat ride on Lake Pichola (boat ride depends upon the water level in the lake) with visit to Jag Mandir. Dinner and Overnight at hotel.  B/D 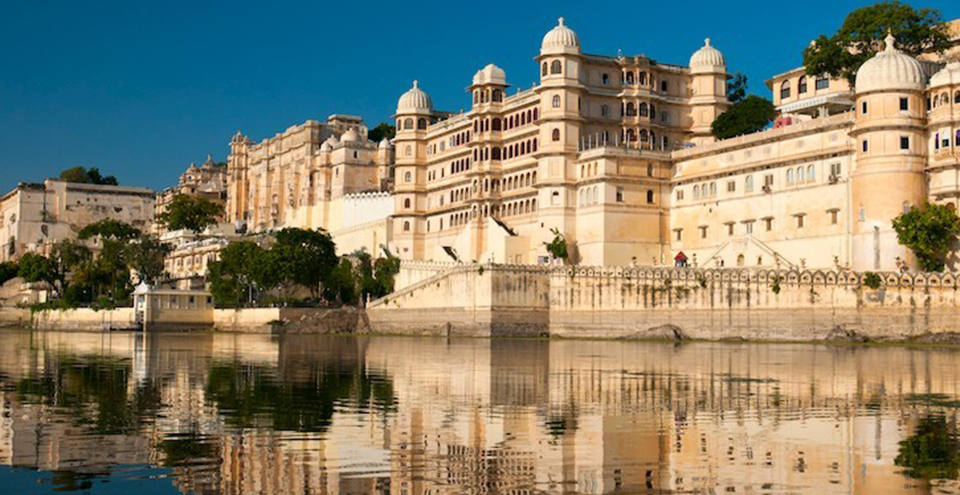 Day 12: Udaipur–Pushkar
After buffet breakfast at the hotel, drive to Pushkar. The village of Pushkar lies on the edge of the desert. At its heart is one of India’s most sacred lakes. There are 52 ghats around the lake, and numerous temples. In the afternoon explore this small village mainly visiting the Pushkar Lake Ghats and the Bramha Temple, which is one of its kind left In India today. Dinner and Overnight at hotel.   Approx. 285 km/6 hrs  B/D

Day 13: Pushkar–Jaipur
After breakfast at hotel drive to Jaipur. Jaipur or The City of Victory was founded by Maharaja Sawai Jai Singh II in 1727. It is the only city in the world symbolizing the nine divisions of the Universe through nine rectangular sectors sub-dividing it. The architect who formalized the city’s plans on the Shilpa Shastra, the epic Hindu treatise on architecture, mixed it with the sublimity of the Mughal and Jain influences of those times. The city was painted pink in 1853 in honour of the visit by Prince Albert. Rest of the day at leisure in Jaipur. Dinner and Overnight at hotel.   Approx. 150 km/3 hrs   B/D 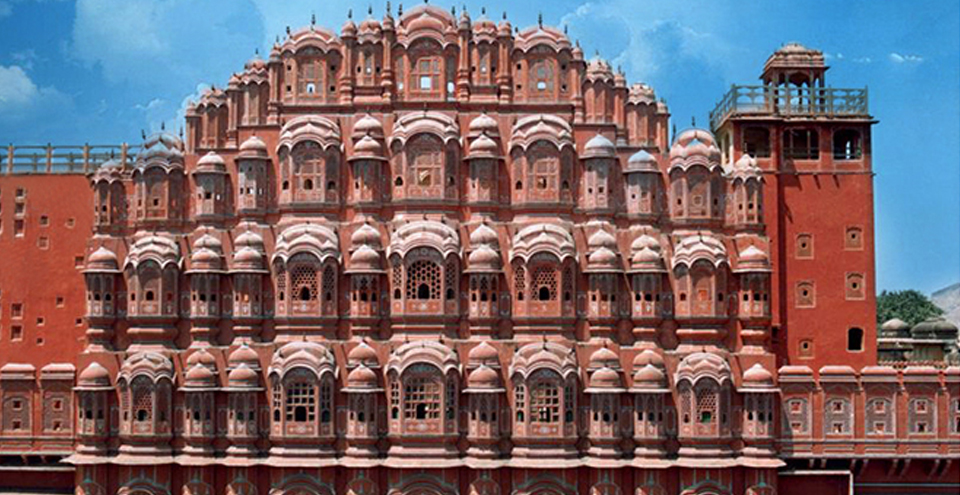 Day 14: Jaipur
After breakfast at hotel proceed for excursion to Amber Fort on the way you will stop at the Palace of Winds for a photo opportunity. Continue your drive to Amber fort. Amber Fort, set in picturesque and rugged hills is a fascinating blend of Hindu and Mughal architecture. Enjoy elephant ride to climb up Fort. In the afternoon proceed Jaipur city tour visit City Palace, a beautiful palace complex full of treasures now housed in the museum area. City Palace is a delightful blend of Mughal and traditional Rajasthani architecture. It houses the Chandra Mahal, Shri Govind Dev Temple and the City Palace Museum. Also visit Jantar Mantar or Royal Astronomical Observatory. This observatory is a collection of architectural astronomical instruments, built by Maharaja (King) Jai Singh II. Each instrument has a specific purpose and gives an accurate reading. Evening visit colourful bazaar passing through the rose pink residential and market areas of Jaipur. Dinner and Overnight at hotel.  B/D 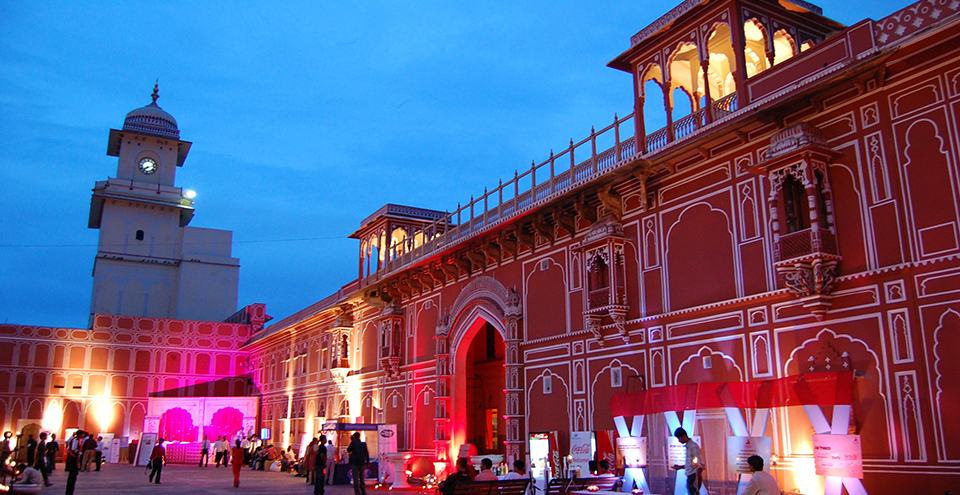 Day 15: Jaipur–Fatehpur Sikr –Agra
After breakfast drive to Agra on the way visit Fatehpur Sikri. Fatehpur Sikri, built during the second half of the 16th century by the Mughal Emperor Akbar. It bears exceptional testimony to the Mughal civilization at the end of the 16th century. It offers a unique example of Architectural ensembles of very high quality constructed between 1571 and 1585. Post visit continue to Agra, home of seven wonders- Taj Mahal. On arrival at Agra, check in at hotel. Dinner and Overnight at hotel.  Approx. 260 km/6 hrs  B/D 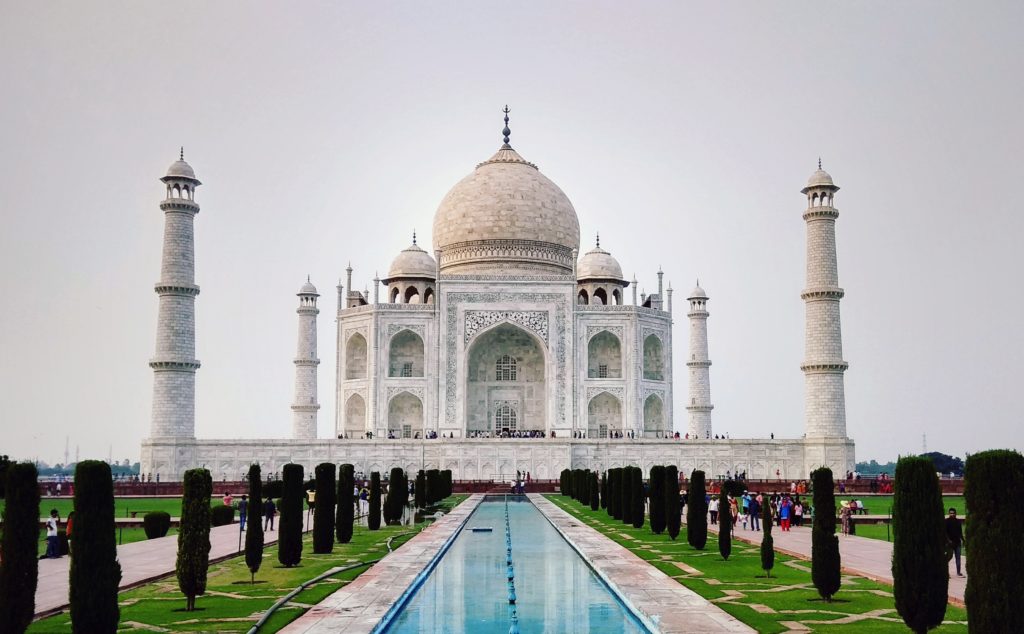 Day 16: Agra–Delhi- Delhi airport
After breakfast at hotel proceed for Agra city tour, visit to The Taj Mahal (remains closed on Friday’s), perfect in its symmetry, is a monument to the love of Emperor Shah Jahan for his wife Mumtaz Mahal. The construction of the Taj Mahal started in 1631. It took 20,000 artisans 22 years to complete this poignant mausoleum that blends subtlety with grandeur, and a massive overall design with immaculately intricate execution. On the inner walls, jewel-like stones create beautiful designs in white marble. The Mughals perfected the art of embedding semi-precious stones into marble and the Taj is the finest example of this; it is a special process called pietra dura. After visit of Taj Mahal proceed for the visit of Agra Fort. Agra Fort, was where the ageing Emperor Shah Jahan, imprisoned by his son, watched from a distance the fulfilment of his life’s dream – the building of the Taj Mahal in memory of his beloved wife. The fort is really a city within a city, which embraces the Moti Masjid, the Diwan-i-Am or the Hall of Public Audiences, the Diwan-i-Khas or the Hall of Private Audiences, the Octagonal Tower, Jehangir’s Palace and many more monuments. In the afternoon drive to Delhi. On arrival in Delhi transfer to airport to connect your flight for onwards destination.    Approx. 200 Kms/4 hrs   B/D